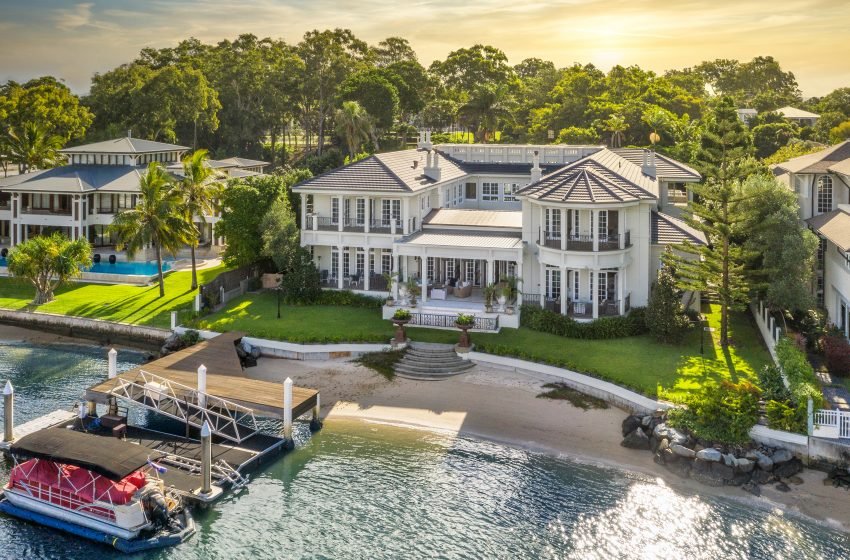 Queensland’s most expensive home this year has just sold on the Gold Coast, after only 11 days on the market.

‘Alston’, a three-level mansion at 5 McMillan Court, Southport, was listed for $25 million in early March, and immediately attracted offers.

Amir Prestige agent Carlie Mills says the sale contract will be finalised next week, for ‘close to the listed price’.

“Properties of this stature don’t come up often and it attracted a lot of interest,” Carlie says. “It was designed by architect Bayden Goddard, so the quality of the build, in that position with the wide water and skyline views, it’s definitely unique.”

“It’s one of the best homes on the Gold Coast, let alone Australia.”

The luxury chateau is stunning inside and out.  Polished parquetry flooring and ornate ceilings extend throughout much of the estate, from the grand, dual staircase entry, through to the open-plan, circular kitchen.

The entire building is an entertainer’s dream. A central courtyard connects formal dining and living spaces, as well as a dedicated billiards room, executive office with a two-level library, a gym, heated indoor pool, spa and sauna.

Six en-suited bedrooms can be found on the second and third floors of this sprawling, 2,225sqm dwelling, with the master suite occupying the entire upper southern wing.

The grounds are just as spectacular as the main residence – full of light and greenery. Bubbling fountains and fruit trees provide the perfect setting for a relaxing afternoon, with unobstructed views of the Gold Coast skyline before you. Lush lawns lead down to a private, sandy beach with its own deep-water pontoon. Hop on the jetski, or unmoor your yacht for a quick trip down to Broadwater, Marina Mirage, or even out to sea!

“There is no other property like this,” Carlie says. “It has that timeless charm and elegance, and top finishings throughout.”

“It’s located on one of the best streets in the Gold Coast, it’s very tightly held,” she says. “So when properties come up in that area they gather a lot of interest.”

When the sale of 5 McMillan Court is finalised it will be the most expensive property sold on the Gold Coast this year, beating out its closest competitor in Mermaid Beach by about $10 million.

“Everyone wants to buy into the Gold Coast, and we’re just trying to secure homes for everyone,” Carlie says.

“There are more buyers than sellers at the moment, even in the prestige market.”