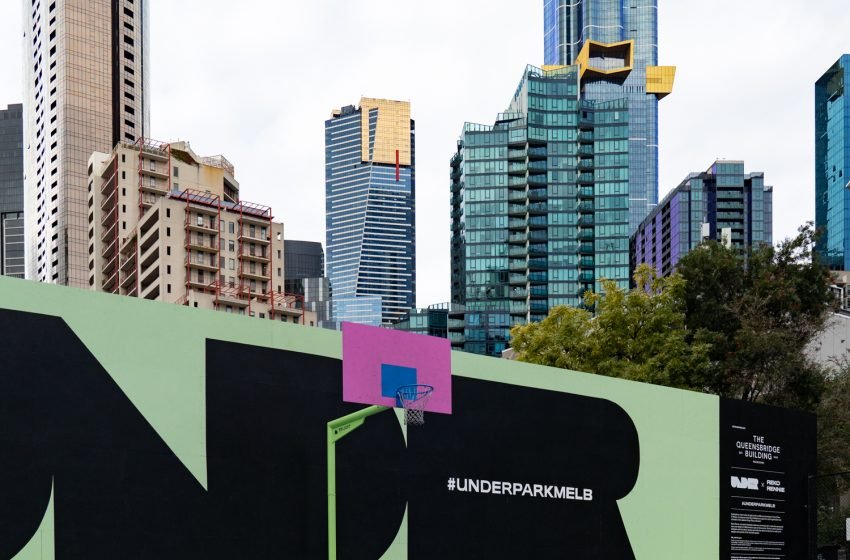 A basketball court with a twist has slam dunked its way into inner-city Melbourne as part of an exciting Southbank apartment project.

Dubbed, ‘The Underpark’, the court is available for keen basketball players to jump on and play for free and features bold, edgy artwork from the talented Reko Rennie.

The Underpark is the combined brainchild of developers Time & Place and builders Hickory, as the pair look to give something back to the community as part of their new project at 84-90 Queensbridge Street.

Time & Place Director, Tim Price, says that he hopes the Underpark will inspire similar projects across Melbourne to add something different to neighbourhoods throughout the city.

“We’ve taken cues from global examples of areas surrounding neglected infrastructure which have been identified and repurposed to deliver bold, exciting activations that can be enjoyed by the community and its visitors,” he says.

“We also hope that the use of this space will open up a broader placemaking conversation with the City of Melbourne about the future use of the neighbouring Kings Way Undercroft and we welcome the public to contribute to this discussion via our Underpark website,” Tim explains.

The eye-catching artwork draws inspiration from the land it is positioned upon, reflecting the important cultural heritage of the inner-city site.

“Reko has produced a vibrant, daring piece of work that speaks to the culture for which our city is known,” Tim says.

Rennie describes his excitement at the project which is available for basketball players to book one-hour half court sessions on a weekly basis.

“I’m very honoured to create an artwork for the Underpark basketball court on the traditional lands of the Boon Wurrung and Wurundjeri people,” Rennie says.

“The bold and bright camouflage design I created celebrates our visible cultural identity where in the past camouflage has been used to conceal, here it proudly reveals a strong and vibrant cultural history,” he says.

Booking and playing on the court is available for a limited time only as construction for the apartment project is set to get underway later this year.