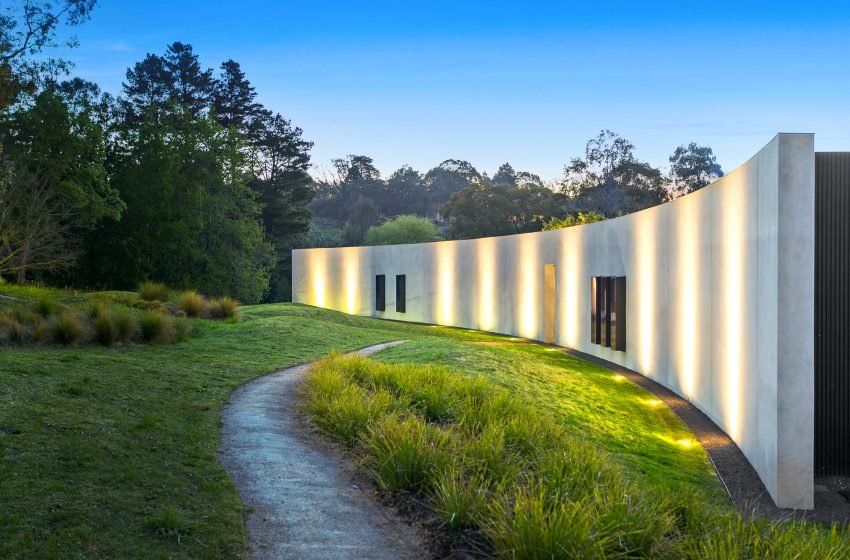 One of South Australia’s most iconic homes has been secured by an international buyer for $3.9 million at an unusually peaceful auction, in line with the property’s tranquil nature.

The architectural beauty is like something never seen before, with its eye-catching curved façade blending in wonderfully with its Adelaide Hills surroundings.

The vendors are thrilled. They didn’t build the home with the intention of selling so there is a bit of emotion there because they have truly loved living in the home for eight years.

“But they’re very happy with the result and they’re also happy that it went to a good buyer which is important too,” explains Mr Giordano.

The weekend’s auction saw four local and two international bidders vying for the award-winning home with the action kicking off at the $3.5 million mark before Mr Giordano decided to hold it over and begin negotiations between the two most keen buyers.

“Normally there is a tremendous amount of friction in post auction negotiations, but because we were sitting down in a world-class property which is so incredibly relaxing, it was actually very pleasant. It was very amicable which is never normally the case,” he describes.

The marvellous home at 14 Williams Road, Heathfield, boasts an inviting pool and tennis court as well as featuring high-end finishes that have been carefully thought out to embody its leafy setting.

“It listed a very strong emotional response due to two reasons, firstly because of the rather contemporary nature of the architecture and then, of course, the idyllic green hill backdrop,” says Mr Giordano.

“Probably the most thought-provoking thing about the home is the juxtaposition between a very contemporary piece in a very tranquil setting, but it has been designed in such a way that it is not an imposition to the landscape.”

It works with the landscape and is a living, breathing piece of art with the façade taking on characteristics of the surrounding environment.