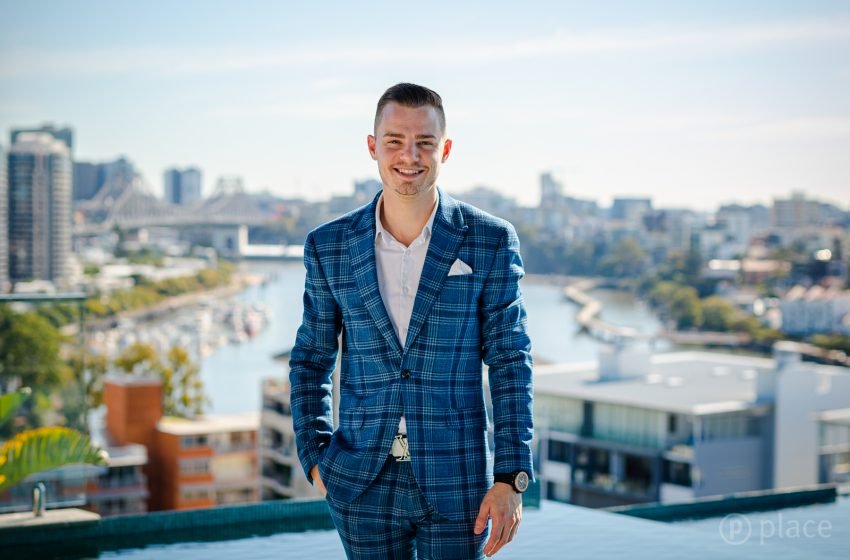 On the back of a bumper month of sales in January, Place Estate Agents’ Michael Bacon is this week’s OzHomeNews Agent of the Week.

The Brisbane-based agent is one of Australia’s rising real estate stars, and with 17 sales equating to $11.35 million last month alone, it’s easy to see why!

“I started in real estate when I was straight out of school, I grew up in Yeppoon and I started with an agency there called O’Reilly’s Real Estate.

“A lot of people said that I was too young to get into real estate which drove me on. I approached 32 agencies in Yeppoon and Rockhampton and everyone said no.

“But O’Reilly’s gave me a shot and then I managed to get a few contacts down in Brisbane and I got offered a job at Place.

“I got offered jobs on the Sunshine Coast and down in Sydney but I didn’t know the areas as well as Brisbane and I was broke at the time and I couldn’t afford it!

What did you really want to be when you were growing up?

“I’m very creative and I got accepted to do a bachelors in design as I’ve always been fascinated by design and had that creative vibe.

“Real estate was more of a longer-term goal for me, but I thought to myself that I love the architecture side of things and I love talking to people too.

“So I made the decision to give real estate a shot instead.”

Any mentors or inspirational figures along the way?

“Ross O’Reilly up in Yeppoon was a bit of a life coach for me.

“A lot of agents just get taught the same thing from mentors but Ross taught me a lot about interacting with people, reading body language and so on, more the psychology side of things.

“Then obviously Simon Caufield at Place, he is one of the top three agents in Queensland and when I joined his team, I just sponged knowledge off him for my first year.

“He has made me excel as a person and as an agent. He has been a really good mentor for me and good mate too at the end of the day which is a good balance to have.”

Any large sales or big moments in your career that stand out?

“Our client at the time was in Hong Kong and he wanted around $4 million for the property. We took it to auction and Simon held the suburb record of $4.2 million and I wanted to beat it!

“So we added an extra $8, as that is a lucky number in Chinese, and we got the deal done.”

What’s the funniest thing you’ve come across in your time working in real estate?

“Another funny story happened last year at an open home in Cannon Hill.

“There was about 15 groups at the viewing of this large family home and a lady who was inspecting had two young kids with her.

“They had just finished football and literally just started jumping in the pool at an open home whilst their parents were upstairs!

“The mother was so embarrassed and was yelling at them outside and I said to her ‘That’s ok you have to try before you buy anyway.’”

What’s your favourite thing about working in this industry?

“You can determine what you want to go. If you want to work four hours or 12 hours its completely up to you.

“I’m a very sociable person and I love meeting different people. I’ve met some well-known people during my career at such a young age, selling the likes of Quade Cooper’s house and people with public listed companies too.

And your least favourite?

“I don’t really have a least favourite thing, sometimes the hours you put in can be mentally draining.

“Last week I worked 85 hours in the week which is a lot and it can be hard to switch off at times.”

What advice would you give to yourself if you were starting out?

“Don’t get caught up with things that are irrelevant and have thick skin!

“When I was younger, I used to overthink things too much when facing objections and situations like that.

Where would you like to think you’ll be in 10 years’ time?

“I want to be financially fit before I’m 25 years old. The reason for that is because I come from a pretty humble background and longer term when I want to have kids, I want to be able to support them and spend time with them.

“I have a pretty clear goal to be a business partner with Simon and a part owner of Place Kangaroo Point.”

What do you get up to in your downtime?

“I love relaxing at the coast and catching up with friends and family.

“I am really into music too, I actually sing and play guitar and I bought dj decks last year so if I do get a bit of spare time I like to have a play around them!”

Are you a high performing agent who is killing it at the moment? Or perhaps you know someone who deserves a bit of credit for their hard work? If so, then get in touch with us on Instagram @OzHomeNews.