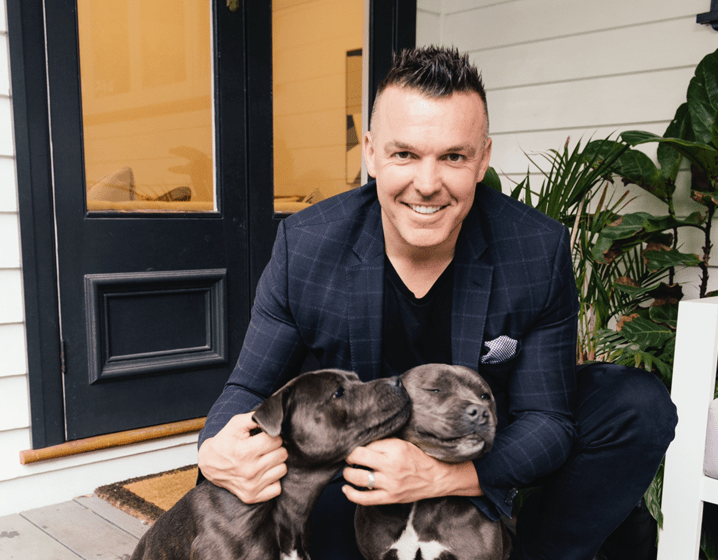 This week’s Agent of the Week is Marshall White’s Andrew Campbell, who, at the age of 36 decided to try his hand in the real estate industry.

Now known for selling some of Bayside’s finest homes, Andrew has made quite the name for himself. OzHomeNews caught up with the former personal trainer to hear how he became one of Melbourne’s leading agents.

Despite always taking an interest in property, Andrew took a rather unorthodox route to get to where he is now, but one essential trait to make it to the top has always been part of his career – work ethic.

“I was a personal trainer and the went into a health food business and things didn’t go so well and I thought what should I do?” says Andrew.

“I turned to real estate because I have always liked homes and talking to people.

“When I was 36 years old and I had lost a lot of money, so I called the director of Buxton Real Estate and said I want a job,” Andrew says.

Andrew realised that he was playing catch up to an extent, so put in the extra effort to give himself the best possible chance to succeed, and succeed he certainly did.

“My mindset was, I haven’t got time on my side, so what can I do to fastrack myself and make sure I get into a better financial position,” he says.

“I had to put in the hours to get there as quickly as I possibly could. Every Monday for five years in a row I would be in the office at 5am, without fail.

So whilst some of his colleagues were tucked up in bed, Andrew was busy entering the weekend’s data, and come 8.30 am he was ahead of the rest.

Fast forward seven years, and after working his way up through the ranks from sales agent to director, Andrew was approached by Marshall White, which has been home for the last three years.

“Roughly three years ago I had a call from John Bongiorno at Marshall White. Three coffees later and I joined Marshall White and I absolutely love it!” says Andrew.

“I remember when I first joined Marshall White, walking in and thinking, ‘Ok I better pull my socks up’!”

Andrew teamed up with his former competitor Kate Strickland and has formed strong bonds with teammates at the leading Melbourne agency including Marcus Chiminello and James Tostevin.

“Marcus and James have been really beneficial to me since joining the team, and the training and education we are provided with at Marshall White is fairly elite which is a really good thing,” explains Andrew.

Well, the training has certainly paid off, with Andrew becoming the go-to guy for some of Melbourne’s stars, having sold the home of Rebecca and Chris Judd amongst other celebrities.

Outside of the Office

In his downtime, the father of two likes to spend his time outdoors and has been making the most of the extra free time that has come his way in recent months.

“One of the good things about COVID is that I’ve been able to train twice a day, whether its long walks or kettlebells and bodyweight workouts,” says Andrew.

“I’ve got two blue English staffys which I love to walk a lot, they’re my little buddies!”

“I’m a passionate St Kilda football fan and I also enjoy doing a lot of meditation and Wim Hof breathing. During COVID everything has been a bit testing so I try to meditate twice a day.”

Andrew was born in Mount Eliza but has lived in the Bayside area of Melbourne since the age of 23 – closer to his beloved footy team.

With Melbourne’s prolonged lockdown slowing the property market down considerably, Andrew, like every agent across the city, hopes that things can soon start to turn.

“My personal view on the current situation is that it’s ridiculous. As agents, we can’t take on private viewings but we go to the supermarket and there are 80 people in there,” he says.

“I’m crossing all fingers and toes that by October 1 we are allowed to do private appointments and we can solicit transactions for our clients.”

“I expect it to be quite busy in the months to come.”

Andrew says that the demand for purchasing new houses is still very much there and that in fact, the return to private inspections only may benefit the market.

“In the last week in my office alone we have had three sight unseen sales, so activity is still there,” Andrew says.

“I found in my marketplace, buyers really liked the one on one inspections, and I found that I prefer it too.”

“You get to really spend time with the buyer rather than rushing different groups through an open home viewing.